The Premier League is arguably the best league in the world. The football is not only exhilarating but the players are mesmerising to watch. Unlike other leagues around the world, where the ‘big teams’ tend to dominate, every Premier League club is genuinely tested to justify their Premier league status and ambitions. This notion is embodied by the unpredictable triumph of Leicester City last year, who comfortably outshone the usual title favourites to win the Premier League against all odds. With the Premier League providing such monumental surprises and dramatic moments throughout the season, it is easy to see why fans as well as spectators are drawn to its vast appeal.

Whilst each club has fans from around the country as well as world, at TicketGum.com we wanted to focus on the local supporters. Local supporters who passionately embody the culture and spirit of their football clubs but are unfortunately not always in the fortunate position to splash out on season tickets.

We carried out our own unique research to find out what percentage of local resident’s weekly wage would be taken by enjoying the full match day experience at their respective Premier League clubs. 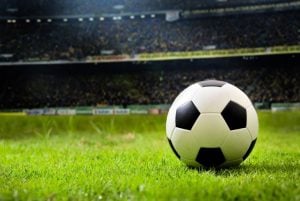 Our first action was to identify the individual cost of each aspect that makes up a full match day experience. The criteria for each Premier League club was set to identifying the lowest possible match day ticket price as well as the cost of a single fixture programme, tea, pie as well as merchandise. Once the price for each of these was found, they were then added together to provide the ‘total cost of a full match day experience’ for each of the twenty different Premier League clubs.

It should be noted that we opted to select the lowest priced home match day ticket for each Premier League club because people are most likely to go for the cheapest option; especially if they are attending a match on a casual or one-off basis rather than regularly. 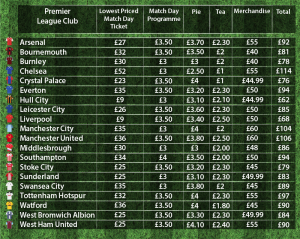 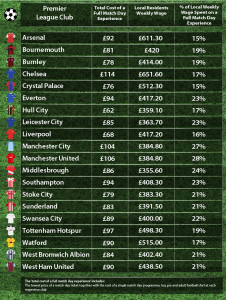 The research revealed that Manchester residents would have the highest percentage of their weekly wage taken by enjoying a full match-day experience. Attending a Manchester United home game and conducting all the match day activates (purchasing the lowest match day ticket, fixture programme, tea, pie and adult jersey) would take an astronomical 28% from a local resident’s weekly wage of £384.80. Close behind was Manchester City, where 27% of a local resident’s weekly wage would be taken by fully experiencing a full home game. In fact, our research found that over half of the Premier League clubs would require local residents in the areas they are based in to spend over 20% of their weekly wage to attend and fully experience a home match day. 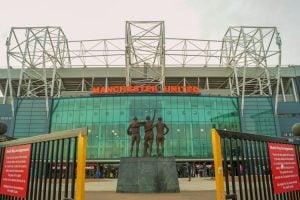 Despite having the highest season ticket prices in the country at a monumental £1,014 – residents of Islington, where Arsenal is located, have the joint lowest percentage (15%) of their weekly wage taken by attaining the full home match-day experience at the Emirates stadium. The other club in question was Crystal Palace, whose local residents of Croydon, would likewise have 15% of their weekly wage deducted by obtaining the full home match-day experience at Selhurst Park.

Whilst it was acknowledged that over half of the Premier League clubs (11 out the 20) would require local residents in the areas they are based in to spend over 20% of their weekly wage to gain the full home match day experience, greater context provides some very fascinating foresight. Out of the eleven, six of the Premier League club’s local residents have median earnings of less than £400 per week. With that in mind, it brings up the age-old debate of: “are local fans being priced out of supporting the team they have grown up following and developing an affection for”? Take the case of Middlesbrough, where 55.9% of the local areas are deprived according to ONS, is it really economical or viable to expect residents to fork out 24% (third highest) of their weekly wage for the full home match day experience? 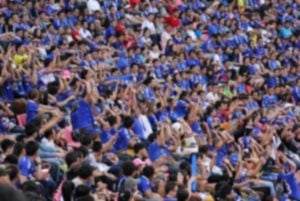 “I can’t really afford nor commit to a season ticket, therefore try to attend at least a few premier league home matches with my son. Since it usually tends to be a one-off, we try to absorb the full match day experience. Alongside the tickets, we get food as well as merchandise therefore the costs do add up. With the vast commercialisation of the game, perhaps clubs could be making more of an effort to subsidise costs and take the burden of local supporters like myself” – Craig a resident as well as an avid fan of Stoke City

“Just like many of my friends, I find myself being in the unfortunate financial position of not being able to splash out on a season ticket. So usually when we get together, we make a collective effort to attend some home matches. Even then it’s very expensive. You’re not only purchasing a ticket for football match but the match day programme, drinks and food. I know that the clubs are not forcing us to spend money but they must understand that we want to make the most of the day. With Premier League teams beneficially attaining massive revenue streams from television rights, you would expect them to become more generous with their pricing structures for fans on various aspects that make up the match day experience” – Harry who lives in as well as supports Middlesbrough

“I have never classified myself as a football fan or follower but me and my family were inspired by Leicester City’s unprecedented title glory last year. As a Leicester resident, I along with the rest of the city were tremendously proud. So, at the start of the season I was highly motivated to take my family to a home fixture. That aspiration though faded when I considered all the expenses that would entail to gain the full match day experience at the King Power stadium” – Rita from Leicester