The latest research by ticketgum.com shows that the Premier League clubs aren’t financially so successful simply for being the best at selling the game. They are financially so successful also because they have the most devoted fans. Ticketgum found that despite not having as many fans as their popular counterparts in the La Liga, the Premier League clubs have fans more than twice as devoted as the La Liga’s.

Eager to determine why the Premier League clubs are so successful financially compared to other European teams, Ticketgum decided to analyse detailed reports of the clubs’ revenues including replica shirt sales. These have been used to indicate just how devoted are fans of the most popular European football clubs, as generally speaking, the more fans are dedicated to their club, the more likely they are to buy merchandise such as replica shirts. Sales of replica shirts were then compared to the number of social media followers on Facebook, Twitter and Instagram that served as the clubs’ fan base.

To ensure accuracy and consistency, Ticketgum looked at the number of social media followers of the top 10 most popular European football clubs and the number of sold replica shirts, using the same top 10 list. Since the latest publicly available data for replica shirt sales was published in February 2017, Ticketgum decided to use the clubs’ social media following from the same period.

While analysing the results, Ticketgum came across some very interesting facts. Barcelona and Real Madrid were found to have the largest fan base in terms of social media followers with 159.9 million and 159.5 million, respectively. That’s nearly 40% more from the third ranking Manchester United, which is with a fan base of 97.9 million the most popular Premier League team in terms of social media followers.

Compared to Chelsea (63.5 million) and Arsenal (55.3 million) that came fourth and fifth on the list of European football clubs with the largest number of social media followers, respectively, the difference is even more striking: 60% and 65%. AC Milan, which came in last on the list with 33.1 million followers, was found to have a nearly 80% smaller fan base on social media than Barca. 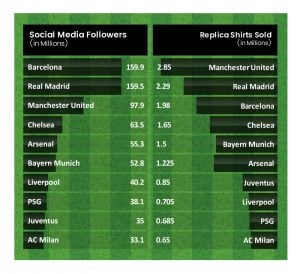 Ticketgum calculated the number of replica shirts the top 10 most popular football clubs in Europe sell per 1,000 fans and found that neither of the two most popular La Liga’s teams (Barcelona and Real Madrid) have the most devoted fans. On the contrary, Barcelona and Real Madrid came in last at the very bottom of the list, falling behind all Premier Leagues clubs and even the Italian Serie A’s Juventus and the previously mentioned AC Milan even though both were found to have an incomparably smaller fan base. 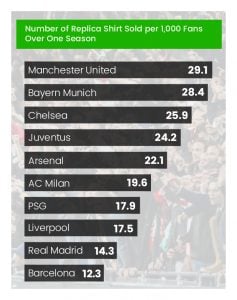