As their bargaining power and influence grows, football players of today wield more and more power over the beautiful game. The footballers’ labour market has seen an increase in the mobility of players, with new signings in European squads increasing sharply from 36.7% in 2009 to 44.8% in 2017.

This begs the question of how loyal football players are to their teams, and are one-club men a dying breed?

Ticketgum.com has analysed figures from the Football Observatory from October 2017. They have mapped the average number of years a footballer spends in the employer club’s first team squad, as of the current domestic league season. According to the football statistic’s site, this was an indication of a team’s stability, stating that player loyalty gives clubs a competitive advantage “on a sporting level [better medium and long-term results] or an economic one [a greater capacity to launch careers of club-trained players and generating revenues through their transfer]”. 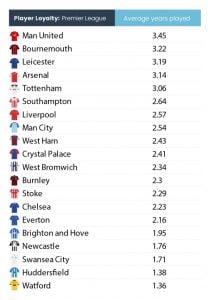 Loyalty in the Premier League: The average years played by club.

The results revealed that England’s Premier League had the most loyal players after Austria, with a player staying on average 2.41 years in their club. A Premier League breakdown revealed that the team with the most loyal, and stable, squad was in fact Manchester United, where footballers played for an average of 3.45 years; an average undoubtedly lengthened by Ryan Giggs’ 24-year stint at the club. On the other end of the scale, players only stuck with Watford F.C. for an average of 1.36 years.

Figures show that the loyalty of Arsenal players has decreased in recent years, from a player staying with the club an average of 3.44 years in 2015 down to 3.14 in 2017. This comes after Oxlade-Chamberlain’s £35m transfer from Arsenal to Liverpool in August this year.

However, the English Premier League was placed among the most stable leagues in Europe, with newly signed players representing 33.3% of the league. This is compared to the Portuguese Primeira Liga, where 57.6% of players were signed over the course of the year, as of October 2017.

How does player loyalty fare across Europe?

According to the study, the country with the least loyal players in Europe was Romania, where footballers only stayed for just over a year (1.14).  Also included in the bottom ranks of the study were Serbia (1.20 year average), Cyprus (1.21) and Greece (1.26). 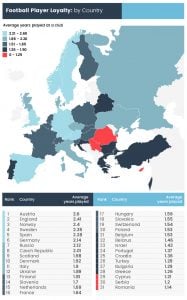 The club where players stay the shortest amount of time in European Leagues was Israel’s Hapoel Acre, where players stayed no longer than a mere 0.22 years. Compare this to Russia’s CSKA Moskva, where the loyal club members averaged 6.98 years with the team.

The analysis of this transfer trend confirms that a stable, loyal team comes at a price few clubs can afford.

So, why are players leaving clubs?

With more money in football than ever before, the sums offered to players would tempt even the most faithful footballer. But it isn’t always about the lure of money. Take Dimitri Payet’s 2017 transfer, for example. The French midfielder signed a five-and-a-half-year contract with London club West Ham in February 2016, and less than a year later it was announced that Payet no longer wanted to play for the club, citing a family crisis as the reason. The footballer even reportedly took a pay cut to secure a return to the South of France and play for Marseille.

Location can therefore be key for some footballers, which explains the appeal of London clubs over their northern counterparts for some. However, being far from your family, as in Payet’s case, or in a different climate and culture may prove to be too much for some players. This certainly was the case for Michael Owen, who said that his move to Madrid was a difficult time for the footballer’s family, going as far as to describe it as a “horror story for me off the pitch”.

Whatever the reason may be, after analysing the transfer trends across European Leagues one-club men will become less common as horizons broaden for players in the future. What is unclear, is how this will change the landscape of top-level football and whether it will throw into question the credibility of the beautiful game.