Another season is nearly over and, once again, it has been a disappointment for Arsenal. The Gunners started off the campaign as one of the favourites to win the Premier League title, but failed to capitalise in a season that saw their rivals falter. Arsene Wenger’s stubbornness and reluctance to sign a world-class striker have enraged fans to the point that some of them want him to leave. If Wenger does stay this summer, he needs to make drastic changes to his policy and splash the cash in the summer transfer window.

The most obvious flaw in this Arsenal squad is the lack of a prolific striker. Wenger needs to sign a player who will guarantee at least 20 league goals. Both title contending teams, Leicester City and Tottenham Hotspur, have inexhaustible strikers in Jamie Vardy and Harry Kane, respectively, who have boosted both teams’ surges for the title. Although Manchester City have suffered a disappointing season, they have the clinical Sergio Aguero to call upon and if the striker had been fit throughout the whole campaign, they would be right up there challenging now.

Arsenal are consistently unlucky with injuries, so need strong back-up in all areas. This has been a problem in defence this term and, with Per Mertesacker past his best, Wenger needs more cover at the back. So perhaps the four key players Arsenal should look to sign in the summer are two world-class strikers, and two rock-solid central defenders. 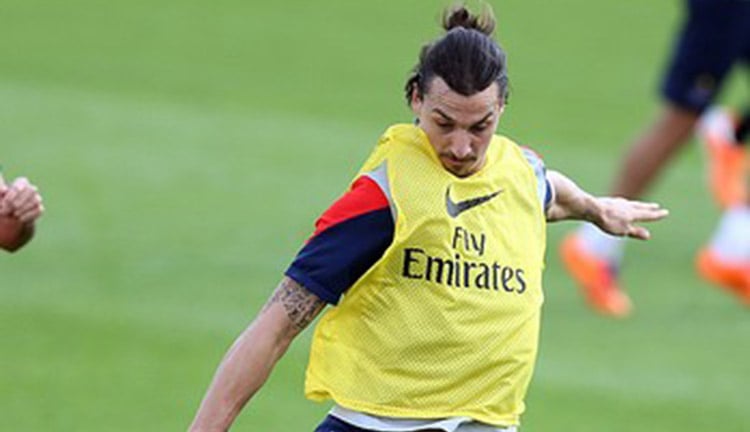 “Zlatan Ibrahimovic” (CC BY 2.0) by  Doha Stadium Plus

Ibrahimovic has hinted that a move to England may well be on the cards when his contract finishes at Paris Saint-Germain. If the French club fail to pen another deal to keep him at the end of the season, he may be coaxed to the Premier League for a year before moving on to the MLS league of America. The player will demand high wages, but whichever club manages to strike up a deal will be rewarded with a high volume of goals. The Swede is considered as one of the best strikers in the world, but has never won a Champions League medal. A move to the Gunners could offer him one last opportunity to earn one.

A move for Ibrahimovic would be a mouth-watering acquisition, but Wenger also needs a striker who can play for the club on a long-term basis. Borussia Dortmund’s Aubameyang could be ideally suited to this role. At the time of writing, the Gabonese international has already bagged 41 goals across all competitions for Dortmund, which is more than twice the amount of Olivier Giroud and Danny Welbeck put together. The outstanding marksman will be hunted down by the top clubs in Europe this summer, and Arsenal would have to part with large amounts of cash to secure him. But at only 26 years old, he could be an incredible investment.

Although Williams is not a marquee signing, if Wenger forks out for a world-beating striker like Aubameyang, he may not have as much money to spend in other areas. Williams could be ideal for the Gunners and a switch to the Emirates could be the dream move for the Welsh international. After rising to the top with Swansea City, Williams has quietly become one of the top centre-backs in the Premier League. Although Tottenham Hotspur have been hailed for their defensive prowess this year with Toby Alderweireld emerging as the number one defender in the country, Williams has better stats than the Belgian in key areas. At the time of writing, Williams has performed over one hundred more key touches, he has 85 tackles to the Belgian’s 52, and 88 interceptions to Alderweireld’s 63.

Like the Spurs man, Williams is excellent with his feet (see video above) and has proved to be a competent player of the ball. He is also dangerous in set-piece situations where he is capable of scoring goals. According to market value data, Williams is valued at around £5million and would be an absolute steal to anyone who managed to sign him at that price. The 31-year-old still has a good few years left in him as a defender and may wish to finish his career on a high at a top club like Arsenal.

Before last summer, Arsenal fans may have thought it absurd to consider signing a player from one of their biggest rivals. But Petr Cech’s famous switch from Chelsea to Arsenal means that this is a transfer that could now easily happen. Terry has been one of the greatest defenders of the Premier League era and was pivotal in steering Chelsea to the title last season. His contract at Stamford Bridge runs out this summer and his future at the club is shrouded in uncertainty, although the player himself has stated that he is not ready to retire. If Chelsea fail to offer him another year on his contract, he may feel that he has been unfairly treated after everything he has put into the club and seek a move.

Terry can still handle the pace of the Premier League and can bring an unparalleled wealth of experience, expertise, and tactical know-how. If he leaves Chelsea this summer as a free agent, it would be foolish if Wenger doesn’t try to coax him to the Emirates.

Of course, there are numerous other top-quality players that Wenger could set his sights on in the summer transfer window. However, the most important thing for his future at the club is that he makes some big moves.