Messi At Champions League: Will Barcelona’s Ace Player Weave His Magic Again
Lionel Messi had a dream run in 2017/2018 football season until his injury. His right arm fracture on October 20 put him out of the field for at least three weeks, according to reports. But to everyone’s surprise, Messi was back in action in the first week of November undergoing training. He was to be part of the Barcelona squad to take on Inter Milan on November 6 in the ongoing Champions League.
Barcelona has shown impressive scores and wins even without the presence of Lionel Messi. The team has won four games, which include two wins one against Inter Milan at Nou Camp for 2-0 and the other is defeating Real Madrid at La Liga for 5-1. But Lionel Messi is a definite advantage to the team, which they cannot ignore, even if their team is in top form this season. Here is why Messi remains the key player at Barcelona.

Messi 2017-18 Statistics
Although Barcelona had to exit early on in the UEFA Champions League, Messi has an impressive statistics with having bagged 6 UEFA Man of the Match wins in the Champions League game. He recorded around 18 assists and 45 goals in the 2017-18 season. The team also got thrashed at the FIFA World Cup with just one goal to its credit in the game. In spite of entering the knockout stage its game style did not satisfy fans.
However Messi had an excellent run at Le Liga during May 2018 leading the scores and assists with 34 and 12 respectively. He also had the maximum key passes of 78 and dribbles numbering 185. He was instrumental in the wins at Copa Del Ray and La Liga.

Celebrity par excellence
Messi scored 45 goals in total in the competitions against all the leading European Leagues in 2017-18 season finishing as the top scorer. He has reached it to the Forbes Celebrity list standing at 8th position and second position in the highest paid athlete list of 2018. His contract with Barcelona was extended in 2017, which will have the club keeping him till the 2020-21 season. He gets a whopping salary of $80 million.
Barcelona had reported record annual revenue of 770 million USD in 2017, which breaks the record held previously by Manchester United of 765 million USD during 2015-16 season. It was the highest revenue in sports history then.
Messi’s celebrity status has also bagged him lucrative deals with big names including Huawei, Pepsi, Gatorae, Ooredoo and Hawkers. 2020 will see the opening of Messi Experience Park in Nanjing China which is Messi based theme park. 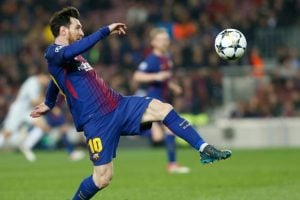 Lionel’s dream run
Described as extraordinary by Ernesto Valverde, the present coach of Barcelona, Messi remains a player of tremendous import to the team of which he has been a . Not willing to face another transfer like Neymar’s switch to Saint German, the Catalan giants had pulled a coup when they managed to retain Lionel Messi until 2021.
Winning the player of the year award four times is not a mean feat, but with Messi it has always been an effortless one. The main reason for his stellar performance is his smart on field strategy. He combines speed, balance and accuracy in the most impactful way. His dribbling skills are powered by his top speed running. But even more amazing than his speed is his rev speed, which gives defenders a very difficult time.
At the outset Messi may look too short for the game but he uses his lean and short build to his advantage. He can make rapid turns and stay still when needed. And it is very hard to disturb his balance, which many defenders have tried at the risk of being booked but failed. 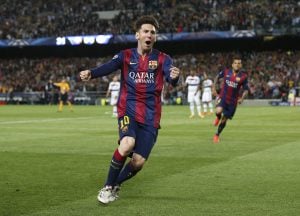 Accurate striker
And accuracy is what has made Messi the greatest free kick goal taker in recent times. He manages to maintain accuracy with his magical left foot kick. It is rare to see his free kicks move off target. And these are not the only advantages that Messi has up his sleeve. He is also the most patient and smart player. He does not get frustrated easily and keeps searching for any opening when the defenders take their attention off him, even if it is just for a fraction of a second.

And he takes help from his game reading skill. He can map out the path his opponent will take even before his opponent, which is what has made his one of the prolific goal scorers. He can instinctively identify gaps and grasp them before the rest. But this has also made it difficult for the team as not all team mates can grasp the same opportunity to abet his maneuver.

Barcelona coach Valverde’s decision to add the talented forwardto the team in its match against Inter Milan during Champions League may stem from the fact that Barcelona cannot afford to miss a prolific player like him. But at the same time Valverde does admit that the safety of the player has to be confirmed before his participation in the game. Thus it is not surprising that although Messi was in training during the end of October 2018, he did not appear in the game against Inter Milan on November 6. Valverde is mulling over possibilities of including Messi intermittently as he is not willing to risk Messi’s safety in a bid to outmaneuver Inter Milan. With Barcelona in top form now his decision may serve well for the team. Barca is leading at 10 in the Group B teams with Inter trailing behind at 7 points.