As Arsenal gear up for their showdown with Spurs in the kick offs on Sunday (November 30) all eyes are on the Gunners. In the post Wenger phase, Emery is quite optimistic about the performance of the team, which is not surprising given his record at Sevilla.
Wenger stepped down as manager of the team during the latter part of pervious season after a momentous journey. Being one of the top contenders in 2018-2019 English Premier League,is the team geared up to prove their mettle?

Arsenal Post Wenger
It is a well-known fact that Arsenal are more dominant at home than in their away matches. The held the 12th position in the away rankings, while they finished third in their home game ratings in the previous two leagues.
While Wenger is behind the team’s success in previous seasons and reigned supreme for over two decades, he was heavily criticized for his lack of focus on detail. Unai Emery’s entry is aimed at changing the side’s fortune for the better this season.
Wenger’s team were either too intricate or made gross errors leading to their drop in the ratings. Emery’s job is to find the right balance minimizing the errors and enhancing the strengths of the side.
Emery has already improved the team in several aspects since his leadership last summer. After initial losses to Chelsea and Manchester City, the Gunners have had a great run this season with an unbeaten 18 match victory. 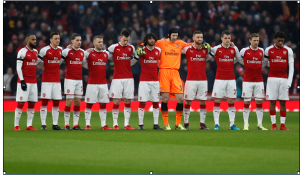 Will the new additions provide the needed reinforcement?
The new recruitments by Emery this season is focused on improving the line of attack. Henrikh Mkhitaryan, Pierre Emerick Aubameyang and Alexandre Lacazette are the new additions while, Mesut Ozil has renewed his contract with the Gunners. These formidable four have put up a stunning defense and fans expect more of the ilk as the fight intensifies.
Defense has for long been a sore point with Arsenal. The game with Leicester, especially the first half on November 26 is ample proof. Arsenal showed a very weak defense against Watford too. The total conceded goals in the season for the team are 125, which is much higher than Chelsea with 82 and Liverpool with 78. Manchester City remains at the top with conceding just 55 goals.
However, despite the new additions, Arsenal still has a long way to go to reach the defense stronghold that Manchester City and Liverpool boast of.
Emery has also proven his lack of tolerance to underperforming players. The Sokratis and Bernd Leno coup from Bundesliga is a fitting example.
The inclusion of Lucas Torreira for the midfield attack is a definite advantage for the team, which had just Granit Xhaka for the defensive position. Torriera will fill in the weak central midfield position with his good ball snagging and passing skills. However his aerial ability is not good, which the opponent teams will try to exploit as much as they can.
And the team has players likeShkodran and PetrCech who have been under the radar for their weak defense and costly errors. They need to up their game, if they intend to be a part of the team this season. 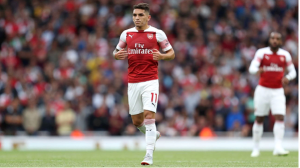 The Arsenal Attack
Unlike their weak defense, Arsenal attack line is quite robust. Aubameyang and Lacazette are expert finishers, while Ozil, Aaron Ramsey and HenrikhMikhitaryan have high creative skills giving the rivals a tough fight. Bernd Leno’s contract is a positive sign that Emery has not lost his focus on the weak aspects of the team. Leno is known for his dynamic goalkeeping and can change the game in favor of the Gunners with his expertise.
The present form of Arsenal is quite impressive. The team boasts of 10 wins, 18 goals and just 3 conceded in previous seven matches, before they meet with Tottenham at the North London Derby. But only two of the 10 wins were against the top tier teams. The Gunners have just a single win in the previous 12 matches against the top six. A win against Tottenham is the only way for Arsenal to turn from their lowly position in the top six to becoming the title contenders. 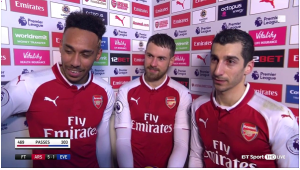 The strong partnership of Aubameyang and Mikitaryan as seen in previous games can prove a game changer for the team. They had added an impressive 90 goals in their previous partnership for Dortmund with 64 assists making them the most successful European partnership. The lack of new transfers is a drawback as Wenger before his exit had brought in players of unknown potential while selling off the big players in the team to rivals.

With Arsenal making great strides in terms of stronger midfielders, better running and efficient organization, fans have much to look forward to this season. And Emery having tackled most of the pressing issues during Wenger’s span, the Gunners are emerging as the confident title contenders. But how far this confidence can take them is yet to be seen as Arsenal still have flaws that they need to address such as the weak defense and poor game starts. The team also lacks smart leaders on field. Players like Ray Parlour, Tony Adams and Lee Dixon had instilled confidence and kept the team in line on the field when things went south. Recent seasons show the lack of vocal leaders, which can be a big problem in crucial games, especially with exit of seasoned players like SantiCarzola and Jack Wilshere.