Cup members: all English Football teams that compete in the Premier League, the Football League and Steps 1-5 in the National League System, as well as selected teams from Step 6.
Formed in: 1871.
Club with most victories in the cup : Arsenal
Greatest scorers in the cup: top scorer for the 2014-15 season was Saido Berahino from West Bromwich Albion.
The Emirates Football Association Challenge Cup, known for short as the FA Cup, is an annual football competition in English Football, which is a single-elimination (knockout) tournament. The Cup is organized by the Football Association. Clubs of all standards compete in the FA Cup, from Premier League champions to amateur teams. 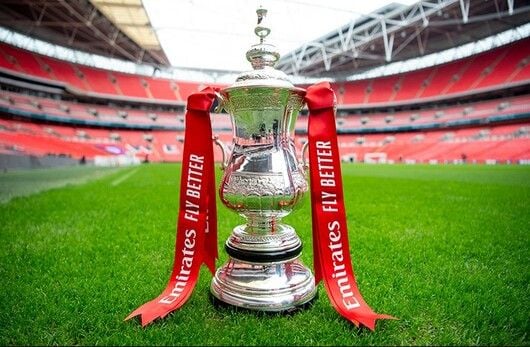 History of the FA Cup

The FA Cup was formed in 1871. It was proposed to the Football Association committee by C.W. Alcock, an influential English sportsman and administrator, in the offices of The Sportsman newspaper. The proposition was accepted and the first tournament took place in November 1871. The first team to win the game was the Wanderes, who beat the Royal Engineers 1-0. In 1888-89 qualifying rounds were introduced, and clubs started competing on a regional basis until only one was left for the fourth qualifying round. In 1901 Tottenham Hotspur became the first club from outside the Football League to win the FA Cup. In 1931 West Bromwich Albion became the first team to win the cup and get promoted in the same season. In 1929-30, W. Dowden ("Doc") scored 19 goals for Wimbledon, which is believed to be the record for an individual for a season. During World War II, the competition was suspended; it resumed in 1945-46. In 1961 Tottenham Hotspur was the first club of the century to win a "double" - both the Cup and the league championship. In 1981, the 100th FA Cup Final took place (as there was a break for several seasons in the 1940s, due to the war), and was marked by what many consider to be the best ever final goal, scored by Ricky Villa of Tottenham Hotspur. In 1999, Manchester United were the first club to decide not to defend their title, by withdrawing from the FA Cup that year and instead competing the FIFA World Club Championship. In 2003, the FA Cup final was played under a roof for the first time, at the Millennium Stadium in Cardiff, Wales. In the 2010 Final, Chelsea player (and formerly Arsenal player) Ashley Cole got the record of player with most FA Cup wins; Chelsea's victory over Portsmouth that year was his sixth win. He later achieved a seventh, when Chelsea beat Liverpool in 2012.

The Most Successful Clubs in FA Cup History

Here are some moments in FA Cup history that no one will ever forget:

How to Buy FA Cup Tickets on Ticketgum

To buy tickets for a FA Cup game, do the following:
Latest Ticket Bookings
30/01/2023 21:11 Hachemi L from France booked 2 tickets to Tottenham Vs Manchester City30/01/2023 19:43 Philipp K from Austria booked 2 tickets to Arsenal Vs Crystal Palace30/01/2023 20:09 Thiago from United States booked 2 tickets to Liverpool Vs Arsenal30/01/2023 18:51 JORGELINA L from Argentina booked 2 tickets to Manchester City Vs Leipzig30/01/2023 17:39 Stephen S from United Kingdom booked 2 tickets to Tottenham Vs Bournemouth
Latest News
13/11/2022 10 Biggest Premier League Football Rivalries | Ticketgum
Football derbies are one of the things that makes the Premier League the best in the world. Games such as Man United vs Liverpool, Tottenham vs Arsenal and Live...26/10/2022 How To Spot Fake Football Tickets: A Guide
Unfortunately, online ticket fraud is becoming increasingly popular. While some tickets may be genuine, many are fake. In fact, over the course of the season, a...18/10/2022 The Most Competitive of the Top 5 European Leagues in the Last Decade
Which is the best league? What is the most competitive league in Europe? It is a debate that rages on through many matchdays and drinking sessions down at the p...10/10/2022 THESE World Famous Goals earn THOUSANDS on YouTube!
Let’s be real, watching your favourite team scoring goals is the best part of the beautiful game. We all know that feeling of pure elation when your team scor...29/09/2022 The Premier League has the most loyal players in Europe
The idea of loyalty in football is seen as being something of the past, considering the game is a lot more “money” orientated, meaning players are a...