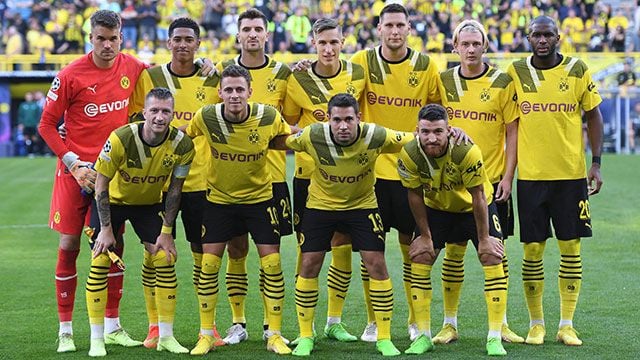 Ballspielverein Borussia Dortmund, commonly known as Borussia Dortmund or BVB Was founded in 1909 by seventeen football players from Dortmund. Borussia Dortmund have won eight German championships, three DFB-Pokals, five DFL-Supercups, one UEFA Champions League, one UEFA Cup Winners' Cup, and one Intercontinental Cup. Their Cup Winners' Cup win in 1966 made them the first German club to win a European title.
Dortmund has the highest average attendance of any Association football club in the world and is the second biggest sports club in Germany and the eleventh biggest football team in the world.
The football team is part of a large membership-based sports club with 100,000 members, making BVB the third largest sports club by membership in Germany. Dortmund plays in the Bundesliga, the top tier of the German football league system. Dortmund is one of the most successful clubs in German football history.

The home stadium of Borussia Dortmund is Westfalenstadion stadium, officially named Signal Iduna. It has a league capacity of 80,720 (standing and seated) and an international capacity of 65,718 (officially seats only). It is Germany's biggest stadium and the seventh biggest stadium in Europe, as well as the third-largest stadium home to a top-flight European club (behind only Camp Nou and the Estadio Santiago Bernabéu).

"This club is everything for me. I’ll stay here at least another 20 years."

The price of the ticket which you see on our website is the final price of this ticket, including tax and service fee. All tickets are available for purchase right now. To guarantee your Borussia Dortmund tickets, you just have to fill the purchase order online. So, enjoy the game and chase your dreams!