Historians believe that tennis originated in the monastic cloisters in northern
France in the 12th century, but the ball was then struck with the palm of the
hand.  It was not until the 16th century that rackets came into use, and the
game began to be called "tennis". It was popular in England and France,
although the game was only played indoors where the ball could be hit off the
wall. Henry VIII of England was a big fan of this game, which historians now
refer to as real tennis. 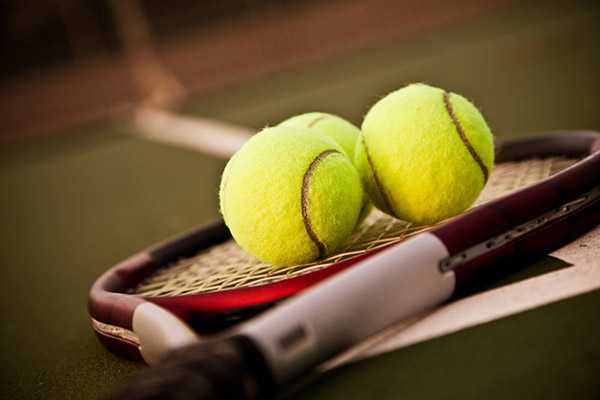 Between 1859 and 1865, in Birmingham, England, Major Harry Gem, a solicitor,
and his friend Augurio Perera, a Spanish merchant, combined elements of the
game of rackets and the Spanish ball game Pelota and played it on
a croquet lawn in Edgbaston. In 1872, both men moved to Leamington Spa and
in 1874, with two doctors from the Warneford Hospital, founded the world's
first tennis club, the Leamington Tennis Club.
Tennis can be played individually against a single opponent (singles) or
between two teams of two players each (doubles). Each player uses a
racquet that is strung with cord to strike a hollow rubber ball covered with felt
over or around a net and into the opponent's court. The object of the game is
to play the ball in such a way that the opponent is not able to play a good
return. The opponent who is unable to return the ball will not gain a point,
while the opposite opponent will.
Tennis is played by millions of recreational players and is also a popular
worldwide spectator sport. The four Grand Slam tournaments (also referred to
as the "Majors") are especially popular: the Australian Open played on hard
courts, the French Open played on red clay courts, Wimbledon played on grass
courts, and the US Open played also on hard courts.
Famous quote:
"I play each point like my life depends on it"
Rafael Nadal
TicketGum has no hidden fees
The price of the ticket which you see on our website is the final price of this
ticket, including tax and service fee. All tickets are available for purchase right
now. To guarantee your Tennis tickets, you just have to fill the purchase order
online. So, enjoy the game and chase your dreams!