League members:  around 190 teams from all around Europe participate in the League every year, with 56 playing in the competition proper.
Formed in: 1971
Club with most victories in the League: Sevilla
Greatest scorer in the League: Henrik Larsson (of Feyenoord, Celtic, and Helsingbord)
The UEFA Europa League, formerly the UEFA Cup, is an annual competition between European football clubs, organized by UEFA. Teams qualify for the Europa league based on their national leagues and cup competitions 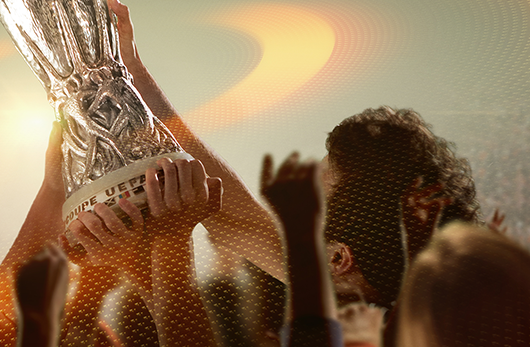 The UEFA Cup was formed in 1971, and changed its name to the Europa UEFA League in the 2009-10 season after it underwent a format change. The UEFA Cup had replaced the Inter-Cities Fairs Cup, the European football competition played from 1955 to 1971, after the number of clubs competing grew significantly and the importance of the competition grew. Tottenham Hotspur was the first team to win the UEFA Cup in the 1971-72 season. In 1999, the UEFA Cup competition was merged with the UEFA Cup Winners Cup, which used to be the second-tier European competition. In 2009-10, the rebranding of the UEFA Cup as the UEFA Europa League included a merging with the UEFA Intertoto Cup: this meant an expanded group stage and a change in qualification criteria. So far, 27 clubs have won the title, with 12 of them winning it more than once.

The Most Successful Clubs in Europa League History

The player who scored the most goals in the League to date is Henrik Larsson, of Feyenoord, Celtic and Helsingbord, who had scored 40 goals from 1996 to 2010, when he retired. Other top scorers of the League are Radamel Falcao (of Porto and Atletico Madrid) with 30 goals since 2010, and Klaas-Jan Huntelaar (of Heerenveen, Ajax and Schalke 04) with 30 goals since 2004.

Here are several moments in the Europa League history no football fan will ever forget:

How to Buy Europa League Tickets on Ticketgum

To buy tickets for an Europa League game, do the following:
Latest Ticket Bookings
30/01/2023 21:11 Hachemi L from France booked 2 tickets to Tottenham Vs Manchester City30/01/2023 19:43 Philipp K from Austria booked 2 tickets to Arsenal Vs Crystal Palace30/01/2023 20:09 Thiago from United States booked 2 tickets to Liverpool Vs Arsenal30/01/2023 18:51 JORGELINA L from Argentina booked 2 tickets to Manchester City Vs Leipzig30/01/2023 17:39 Stephen S from United Kingdom booked 2 tickets to Tottenham Vs Bournemouth
Latest News
13/11/2022 10 Biggest Premier League Football Rivalries | Ticketgum
Football derbies are one of the things that makes the Premier League the best in the world. Games such as Man United vs Liverpool, Tottenham vs Arsenal and Live...26/10/2022 How To Spot Fake Football Tickets: A Guide
Unfortunately, online ticket fraud is becoming increasingly popular. While some tickets may be genuine, many are fake. In fact, over the course of the season, a...18/10/2022 The Most Competitive of the Top 5 European Leagues in the Last Decade
Which is the best league? What is the most competitive league in Europe? It is a debate that rages on through many matchdays and drinking sessions down at the p...10/10/2022 THESE World Famous Goals earn THOUSANDS on YouTube!
Let’s be real, watching your favourite team scoring goals is the best part of the beautiful game. We all know that feeling of pure elation when your team scor...29/09/2022 The Premier League has the most loyal players in Europe
The idea of loyalty in football is seen as being something of the past, considering the game is a lot more “money” orientated, meaning players are a...