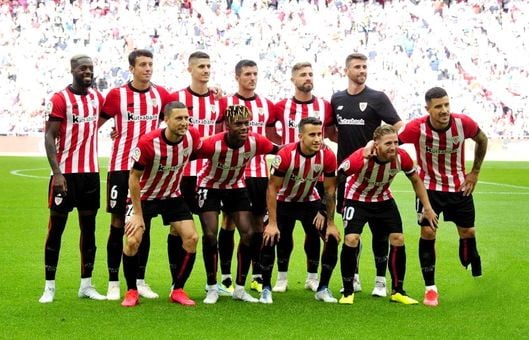 Athletic Bilbao is a Spanish professional football club based in Bilbao, Spain, currently play in La Liga (the top division of Spanish football). The club was founded as "Athletic Club" in 1898 by Basque students who had studied in Britain – hence the English spelling. Several years before that, British expatriates working in Bilbao had formed the Bilbao Football Club. In 1903 the two clubs merged to form Athletic Bilbao, after having played as a combined team in the 1902 Copa del Rey and winning the trophy. The following years were very successful for the club and they won the Copa del Rey several more times. In 1928 Athletic Bilbao were one of the founding members of La Liga. In the 1920s and 1930, the club was managed by British coaches, first Fred Pentland and then William Gambutt, who led them to a string of victories, including La Liga/Copa del Rey doubles in 1930 and 1931. In 1936, football in Spain halted due to the Civil War and resumed only in the 1939-40 season. The 1940s and 1950s were again quite successful for the club, marked by star players like Telmo Zarra and José Luis Panizo, who helped the club secure several major titles. During the 1960s and 1970s, however, Athletic Bilbao had weakened as Real Madrid started to shine. With the appointment of Javier Clemente as manager in 1981, the club's luck changed and it won La Liga in 1983 and a La Liga/Copa del Rey double in 1984. The club had another excellent coach in Luis Fernández, appointed in 1996, who led it to being second in La Liga and qualifying for the UEFA Championship League. In the mid-2000s, Athletic Bilbao was almost relegated; the 2006-07 season was the worst in the club's history. The last five years, however, saw Athletic Bilbao making steady progress; in 2011-2012 they were runners-up in the UEFA Europe League competition and in 2015 they won the Supercopa de España.

How to Buy Athletic Bilbao Tickets on Ticketgum

To buy tickets for an Athletic Bilbao game, do the following: