Ticketgum.com welcomes you into the world of sport. Ordering your Aston Villa tickets is only a few clicks away. We have saved you the best seats in the house, so you can cheer along with all the loyal fans of Aston Villa at the stadium. Our Secure booking process, low tickets prices, and highly trained customer service staff, will make your journey to the match feel easy, safe and pleasant.
* Book Official Aston Villa Tickets Now!
* Aston Villa Tickets Have High Demand, Don't Miss The Opportunity.
* Aston Villa Tickets Are 100% Guaranteed. 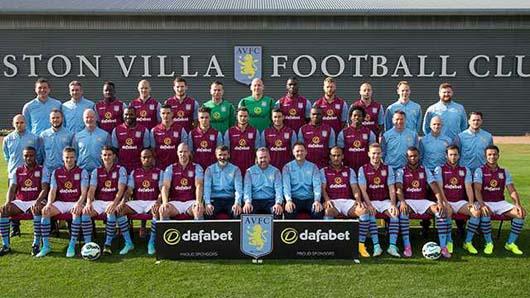 Aston Villa FC were formed in March 1874, by members of the Villa Cross Wesleyan Chapel in Aston (in Birmingham). The four founders were Jack Hughes, Frederick Matthews, Walter Price, and William Scattergood.

The first ever official match the mighty Villa played was against Aston Brook St Mary's Rugby team. As a condition of the game, Villa agreed to play the first half under rugby rules and the second under football rules.

Villa were one of the 12 clubs that founded the inaugural Football League back in 1888. One of the club's directors at the time, William McGregor, is credited as being the founder of the league.

In 1897, Villa won their first Football League trophy, as well as a second FA Cup. In this same successful year for the Birmingham club, they also moved to the ground where they currently are, at Villa Park, which when it was first built was known as Ashton Lower Grounds.

For the next two decades Aston Villa had a largely successful period, winning six FA Cup trophies and several Football League titles. However, after their sixth FA Cup win in 1920, things started to go downhill for the Villa, and by 1936, after 16 years without a trophy, Aston Villa were relegated out of the top division in the Football League, that point being the first time in their history.

And it would be another 37 years before they would next win a trophy, which happened to be a seventh FA Cup success. This seventh FA Cup victory is their last FA Cup to date.
Much of the reason for such a long period of time without a trophy was due to the fact that World War II had cost Villa several players, and the fact that football was suspended for seven years during because of the war.

In 1967, Aston Villa were relegated from the top flight of English football for only the third time in their history, under the guidance of manager Dick Taylor. And things then got even worse for Villa after they got relegated from the Second Division in 1970.

However, two years later they bounced back as champions of the Third Division, and signs of change were present at Villa Park.

In 1973, Ron Saunders was appointed as manager, and by 1977, he had led Aston Villa back into the top flight of English football, the First Division. And in the same season he led them to the dizzy heights of European competition.
A meteoric rise to success once again, which was all made complete, when still under the guidance of Ron Saunders, Aston Villa won the First Division in 1981, a title victory that confirmed to the nation that Villa were back amongst the elite.

To the surprise of many fans, Ron Saunders quit halfway through the 1981-82 season. His replacement though, the softly-spoken assistant manager Tony Barton, also went on to achieve great things for the Villa.
He guided them to a 1-0 victory over Bayern Munich in Rotterdam in the final of the European Cup, making Villa only one of four English teams to have ever won this prestigious trophy, behind Manchester United, Liverpool, and Nottingham Forest.

In 1992, Aston Villa became one of the founding members of the greatest football league in the world, the English Premier League (FA Premier League as it was known at the time). In their first EPL season, Aston Villa did what would be unthinkable nowadays, and finished the season as runners-up, behind winners Manchester United.

At the turn of the millennium, Aston Villa reached their first FA Cup final since they won it in 1957. It was the last ever game at Wembley before it would be knocked and rebuilt into the marvellous sporting arena it is today. However, it would be Chelsea who would win the 1999-00 FA Cup, and have the honour of being the last ever FA Cup winner in the old Wembley Stadium.

How much are Aston Villa tickets?

How much are Aston Villa away tickets?

How much are Aston Villa home tickets?

H2: How much are Aston Villa season tickets?

How to Buy Aston Villa Tickets on Ticketgum?

To purchase tickets for a Aston Villa game, do the following:
Latest Ticket Bookings
30/01/2023 21:11 Hachemi L from France booked 2 tickets to Tottenham Vs Manchester City30/01/2023 19:43 Philipp K from Austria booked 2 tickets to Arsenal Vs Crystal Palace30/01/2023 20:09 Thiago from United States booked 2 tickets to Liverpool Vs Arsenal30/01/2023 18:51 JORGELINA L from Argentina booked 2 tickets to Manchester City Vs Leipzig30/01/2023 17:39 Stephen S from United Kingdom booked 2 tickets to Tottenham Vs Bournemouth
Latest News
13/11/2022 10 Biggest Premier League Football Rivalries | Ticketgum
Football derbies are one of the things that makes the Premier League the best in the world. Games such as Man United vs Liverpool, Tottenham vs Arsenal and Live...26/10/2022 How To Spot Fake Football Tickets: A Guide
Unfortunately, online ticket fraud is becoming increasingly popular. While some tickets may be genuine, many are fake. In fact, over the course of the season, a...18/10/2022 The Most Competitive of the Top 5 European Leagues in the Last Decade
Which is the best league? What is the most competitive league in Europe? It is a debate that rages on through many matchdays and drinking sessions down at the p...10/10/2022 THESE World Famous Goals earn THOUSANDS on YouTube!
Let’s be real, watching your favourite team scoring goals is the best part of the beautiful game. We all know that feeling of pure elation when your team scor...29/09/2022 The Premier League has the most loyal players in Europe
The idea of loyalty in football is seen as being something of the past, considering the game is a lot more “money” orientated, meaning players are a...