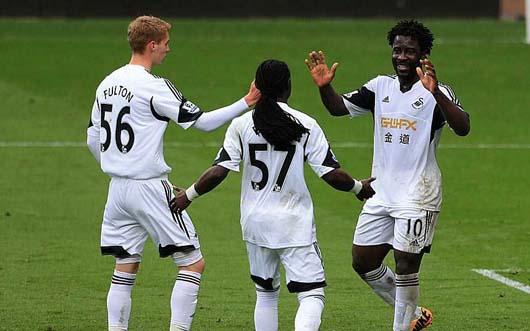 Swansea City is a Welsh professional football club, playing in the English Premier League (currently placed 8th). The club was formed as Swansea Town AFC in 1912 and joined the Second Division of the Welsh League shortly afterwards. It won the Welsh Cup in 1912-13. In 1914-15 they reached the first round of the FA Cup, and managed to win against a First Division side, Blackburn Rovers, who were also the Champions of England at the time. In 1920 Swansea Town moved from the Southern League to The Football League, becoming the new founding members of the League's Third Division and Division Three (South). In 1925 the club reached Second Division and next season it reached the quarter finals of the FA Cup. After World War II, Swansea Town returned to Division Three (South), but several years later managed to be promoted to the Second Division again, where it stayed for 15 years, until it was relegated to the Third Division once again in 1965. In 1967 Swansea Town were further relegated to the Fourth Division. In 1969 the club changed its name to Swansea City, following the change in status of their home town. The late 1970s marked the club's recovery: after the appointment of John Toshack as manager, Swansea City began their climb up, reaching the Second Division in 1979, and the First Division in 1981 – during which season they had managed to win matches against clubs like Manchester United, Liverpool and Arsenal. The mid-eighties marked yet another difficult period for the club, which faced both relegations and financial problems; in 1986 Swansea City landed back in the Fourth Division. The difficult period, interspersed with promotions, relegations and several replacements of managers, continued until the early 2000s. In 2003-04, the club managed to reach the fifth round of the FA Cup for the first time in 24 years. From 2005 onwards things started looking up. Swansea City won the FAW Premier Cup for the second consecutive that year, as well as the Football League Trophy; it returned to the second tier of English football after more than two decades. In the 2011-2012 season, Swansea City was promoted to the Premier League, becoming first Welsh team to play in the division. In the 2014-2015 season, Swansea finished 8th, their highest position in the Premier League so far.

Swansea City has not won any titles in Europe.

To date, Swansea City's most successful period has been from 2011 until today – as it is the first time it has played in the Premier League and the last year has seen it reach its highest placement yet.

How to Buy Swansea City Tickets on Ticketgum

To buy tickets for a Swansea City game, do the following: