Which is the best league? What is the most competitive league in Europe? It is a debate that rages on through many matchdays and drinking sessions down at the pub.

“Surely it’s the Prem, anyone can beat anyone”.

“It can’t be the Spanish League; there’s only two teams”.

“I think it’s the Croatian second division” (We all know that type of football hipster).

Repeat until the end of time.

In a bid to dispel myths, here at Ticketgum we decided to investigate which league is the most competitive of the top 5 European leagues in the last decade, and therefore best to watch. The study looked at the last decade from the 2009/10 season up until the 2018/19 season, gathering data using four methods and a points system. Each method would receive a different number of points:

These points totals were added up to reach a final definitive answer to the question we set out to understand.

Ligue 1 came second with 60.3, whilst the Premier League was the middle-placed league with 63.9 – interestingly though as the last Premier League season had the highest points difference of any league in the last decade, with 82 points. Serie A came 4th with an average of  66.6 and closely behind that was La Liga with 66.9, placing 5th. 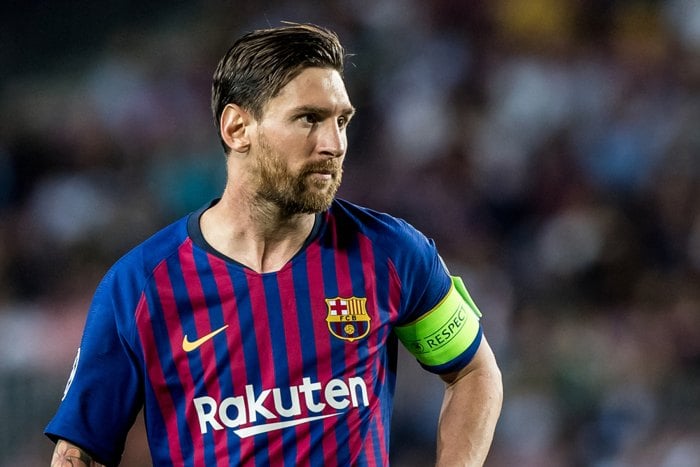 La Liga’s Leo Messi would not be pleased with his leagues ranking. Photo credit: Kivnl/Shutterstock

The second method was more simplistic, as we simply looked at how many different clubs had been champions in the last decade, and quite surprisingly Ligue 1 came first with 5 different champions – (at the beginning of the decade PSG were not the dominant force they now are).

The Premier League was second with 4 different champions (Manchester United and Manchester City, Leicester and Chelsea), whilst Serie A and La Liga were joint third with 3 different champions. Interestingly, two of the league’s three champions are from the same city: Inter and AC Milan, and Real Madrid and Atletico Madrid. The Bundesliga came last with just 2 champions over the decade, with Dortmund winning two titles, and Bavarian behemoths Bayern Munich winning 8/10 of the league titles.

Thirdly, we delved into the number of points won by league champions over the decade. We reached an average over the decade for each league, and then divided that by the total number of points available to win in a league season (114 across the board, apart from Bundesliga, who have less teams so therefore have 108 points on offer). That sum, multiplied by 100, left us with a percentage of points won by average league champions; emphasising the lower the percentage, the less dominant the champions and therefore, the more competitive the league.

You may also like: 11 interesting facts about the English Premier League you didn’t know! 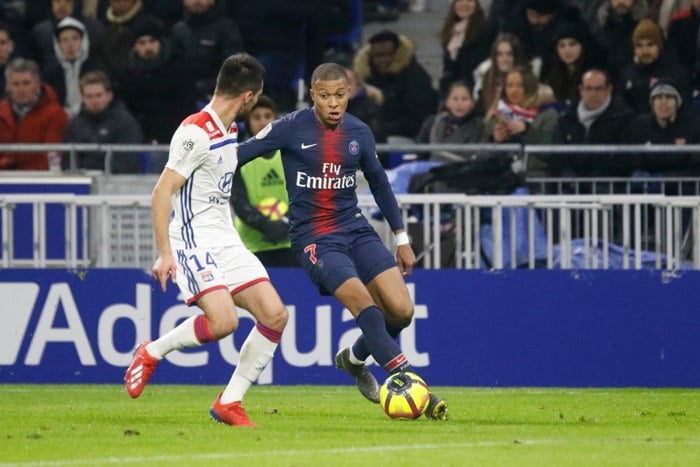 Once again, the Bundesliga topped the rankings with 75.7% of points won on average by champions. Ligue 1 once again made the top two spots. The Premier League came third; likely hampered by the highest points totals gained by Manchester City in the last two years (100 and 98 points). In a familiar pattern, Serie A and La Liga made up the bottom two, 4th and 5th respectively.

The final method to conclude the study was looking at all 30 sides in each league that had been promoted over the decade, and how many of those were relegated after the first season. If a side wins a promotion then relegated the season after, it suggests the league is not competitive enough for new sides to compete and survive.

This may be a shock based on previous results, but La Liga ranked first with 8 of the 30 teams relegated in their first season. Ligue 1 was second with 9, the Premier League came third, but this time joint with the Bundesliga. The Serie A languished in 4th with 3 more relegated teams.

Once all methods were complete, Ticketgum added the points for each together to reach a definitive conclusion.

The Most Competitive League in Europe revealed! 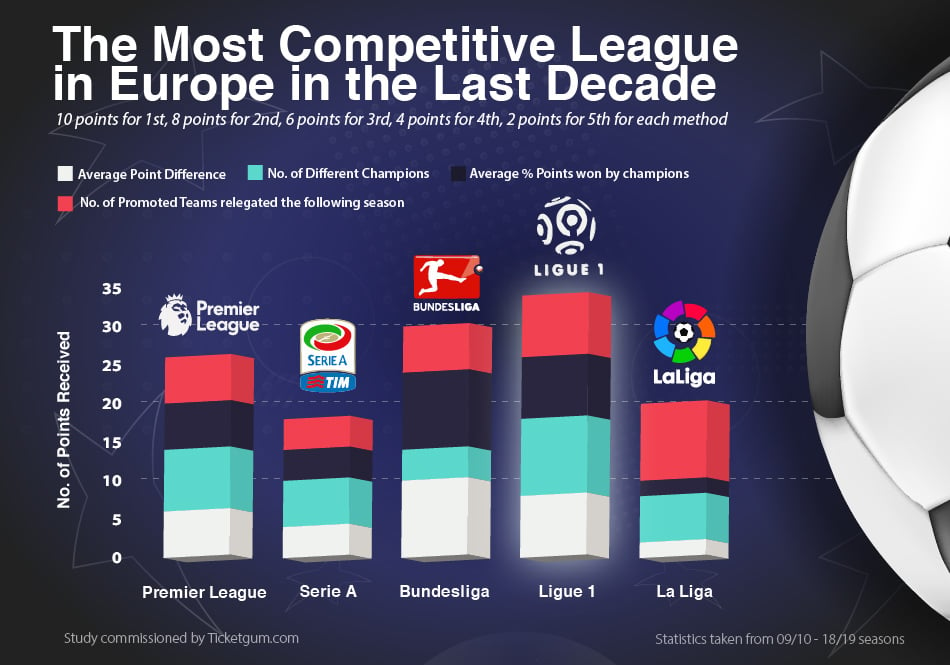 The totals showed that the French Ligue 1 was the decade’s most competitive league, collecting 34 points. Having come 2nd 3 times and 1st once, this doesn’t sound too surprising.

4 points behind in 2nd place was the German Bundesliga with 30 points, losing out on first place due to its low number of varied champions. In 3rd place, controversially to many English fans was the Premier League. La Liga’s late push in the last method moved them above 5th by 2 points to steal 4th place and avoid the label of least competitive; which of course falls to the Italian Serie A who collected 18 points.

Not only did we reveal which league was the most competitive, but we were also able to showcase competitiveness. Based on average points differences for the 5 leagues combined from the start of the decade and the end, the data displayed a 9.4 average increase between top and bottom of the leagues across Europe, suggesting competition is decreasing. Many would point to the increased spending of the top European clubs to blame, but no matter the reasoning, fans hope that this isn’t the case and that the game continues to be the entertaining spectacle it was in the last decade for many more decades to come.