Let’s be real, watching your favourite team scoring goals is the best part of the beautiful game. We all know that feeling of pure elation when your team scores, especially when it’s a winner! These moments are what we love the game for, so it comes as no surprise that people love to re-watch their favourite goals again and again online. This made us think, what is the most viewed goal of all time?

To determine which goals to look into, we considered how famous the goal is and the quality of it. We eventually settled on 15 famous goals from over the years. We looked at each of these goals on YouTube, as either a clip or highlights from the match, and filtered to get the “most viewed” video of those available. From this we made our list. 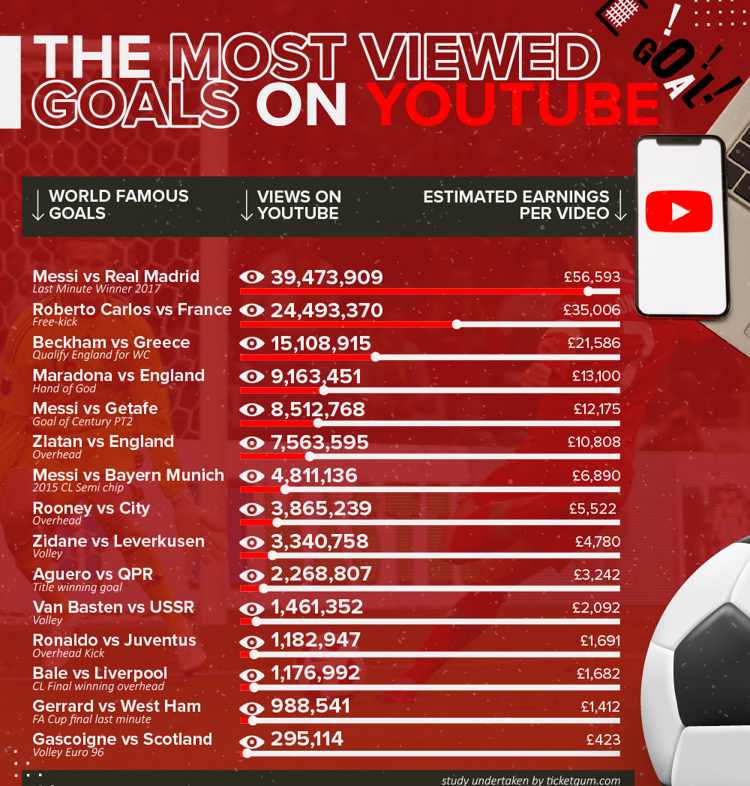 The results we found were interesting to say the least. We found that Messi’s last-minute winner against Real Madrid in 2017 was the most viewed goal with a staggering 39,473,909 views! Us avid football fans will know this goal is famous for Messi’s celebration in which he took his shirt off and held his name up to the Madrid fans.

At the other end of the scale in 15th we have one of the most famous England goals of all time: Paul ‘Gazza’ Gascoigne against Scotland with 295,114 views. A technically brilliant goal in which he volleys past the keeper. This video shows, yet again, another famous celebration whereby Gazza performs the infamous ‘dentist’s chair’ gesture in front of fans.

Our list also contains five trophy winning goals from 4 cup finals, and Aguero’s unbelievable Premier League winning moment from the dramatic 2011/12 season. This shouldn’t come as a surprise though. Goals from the biggest games are always going to be more popular and especially if they are of great significance. Afterall everyone remembers Gareth Bale’s unbelievable bicycle kick in the 2018 Champions League final (1,176,992), than they do Karim Benzema’s opening goal.

You may also like: 12 Premier League stars with amazing records

The most featured player was the aforementioned Lionel Messi. Barcelona’s magician – often branded the GOAT (Greatest of All Time) – had three goals featured in our top 15 list. Messi is also joined on the list by two fellow Argentinians: Sergio Aguero and Diego Maradona. However there are more individual English goal scorers on the list with Wayne Rooney, David Beckham, Paul Gascoigne and Steven Gerrard.

We also looked at how much money each of these videos made. Using the Influencer Marketing Hub calculator, we found that unsurprisingly the most viewed video made the most money. This was Messi against Real Madrid, earning an estimated £56,593. Whereas, on the other end of the scale, Gazza’s goal against Scotland earned only £423. However this is the only video featured in the top 15 that didn’t make over £1000, suggesting that real money can be made from these videos.

We can see that the spectacle of a goal is truly special, hence why it’s no surprise that these famous goals are so popular online. It is also interesting that the top goal is relatively modern: Messi’s ‘Clasico’ winner (2017). It’s interesting that the video taking the second spot is one that is much older than the platform! The video of Roberto Carlos’ free kick in 1997 shows that a great goal transcends generations and even now younger fans and aspiring footballers are looking into the great famous goals of the past.

Below you can see a few of the best goals:

NEW RESEARCH: The Premier League has the most loyal players in Europe